Who Are Happiest by T.S. Arthur

Timothy Shay Arthur was a popular writer during the Antebellum Era. His writings helped spread values and ideas about the middle class, often with a focus on God. "Who Are Happiest?" appeared in WHO ARE HAPPIEST? AND OTHER STORIES, published by Lippincott, Grambo & Co. in 1852.

"What troubles you, William?" said Mrs. Aiken, speaking in a tone of kind concern to her husband, who sat silent and moody, with his eyes now fixed upon the floor, and now following the forms of his plainly-clad children as they sported, full of health and spirits, about the room.

It was evening, and Mr. Aiken, a man who earned his bread by the sweat of his brow, had, a little while before, returned from his daily labour.

No answer was made to the wife's question. A few minutes went by, and then she spoke again:

"Is any thing wrong with you, William?"

"Nothing more than usual," was replied. "There's always something wrong. The fact is, I'm out of heart."

Mrs. Aiken came and stood beside her husband, and laid her hand gently upon his shoulder.

The evil spirit of envy and discontent was in the poor man's heart,—this his wife understood right well. She had often before seen him in this frame of mind.

"And yet he is rolling in wealth, while I, though compelled to toil early and late, can scarcely keep soul and body together."

"Hush, William! Don't talk so. It does you no good. We have a comfortable home, with food and raiment,—let us therewith be contented and thankful."

"None are so happy as those who labour; none enjoy better health than they who have only the plainest food. Do you ever go hungry to bed, William?"

"Do you or your children shiver in the cold of winter for lack of warm clothing?"

"William! Do not look past your real comforts in envy of the blessings God has given to others. Depend upon it, we receive all of this world's goods the kind Father above sees best for us to have. With more, we might not be so happy as we are."

"I'll take all that risk," said Mr. Aiken. "Give me plenty of money, and I'll find a way to largely increase the bounds of enjoyment."

"The largest amount of happiness, I believe, is ever to be found in that condition wherein God had placed us."

"Then every poor man should willingly remain poor!"

"I did not say that, William: I think every man should seek earnestly to improve his worldly affairs—yet, be contented with his lot at all times; for, only in contentment is there happiness, and this is a blessing the poor may share equally with the rich. Indeed, I believe the poor have this blessing in larger store. You, for instance, are a happier man than Mr. Freeman."

"I am, then. Look at his face. Doesn't that tell the story? Would you exchange with him in every respect?"

"No, not in every respect. I would like to have his money."

"Ah, William! William!" Mrs. Aiken shook her head. "You are giving place in your heart for the entrance of bad spirits. Try to enjoy, fully, what you have, and you will be a far happier man than Mr. Freeman. Your sleep is sound at night."

"I know. A man who labours as hard as I do, can't help sleeping soundly."

"Then labour is a blessing, if for nothing else. I took home, to-day, a couple of aprons made for Mrs. Freeman. She looked pale and troubled, and I asked her if she were not well."

"I did not ask why this was; but, after remaining silent for a few moments, she said—

"'Mr. Freeman has got himself so excited about business, that he sleeps scarcely three hours in the twenty-four. He cares neither for eating nor drinking; and, if I did not watch him, would scarcely appear abroad in decent apparel. Hardly a day passes that something does not go wrong. Workmen fail in their contracts, prices fall below what he expected them to be, and agents prove unfaithful; in fact, a hundred things occur to interfere with his expectations, and to cloud his mind with disappointment. We were far happier when we were poor, Mrs. Aiken. There was a time when we enjoyed this life. Bright days!—how well are they remembered! Mr. Freeman's income was twelve dollars a week; we lived in two rooms, and I did all our own work. I had fewer wants then than I have ever had since, and was far happier than I ever expect to be again on this side of the grave.'"

Just then a cry was heard in the street.

"Fire! Fire! Fire!" The startling sound rose clear and shrill upon the air.

Mr. Aiken sprang to the window and threw it open.

Mr. Aiken dropped the window, and catching up his hat, hurriedly left the house. 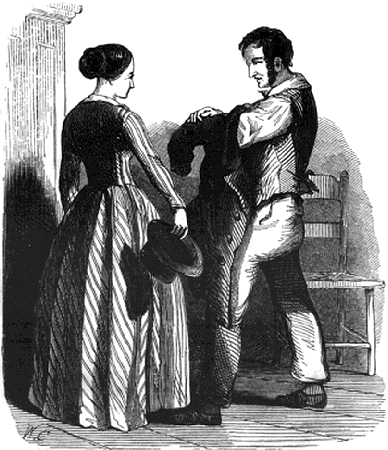 MR. AIKEN'S RETURN FROM THE FIRE.

It was an hour ere he returned. Meanwhile the fire raged furiously, and from her window, where she was safe from harm, Mrs. Aiken saw the large new factory, which the rich man had just erected, entirely consumed by the fierce, devouring element. All in vain was it that the intrepid firemen wrought almost miracles of daring, in their efforts to save the building. Story after story were successively wrapped in flames, until, at length, over fifty thousand dollars worth of property lay a heap of black and smouldering ruins.

Wet to the skin, and covered with cinders, was Mr. Aiken when he returned to his humble abode, after having worked manfully, in his unselfish efforts to rescue a portion of his neighbour's property from destruction.

"Poor Freeman! I pity him from my very heart!" was his generous, sympathising exclamation, as soon as he met his wife.

"He is insured, is he not?" inquired Mrs. Aiken.

"Partially. But even a full insurance would be a poor compensation for such a loss. In less than two weeks, this new factory, with all its perfect and beautiful machinery, would have been in operation. The price of goods is now high, and Mr. Freeman would have cleared a handsome sum of money on the first season's product of his mill. It is a terrible disappointment for him. I never saw a man so much disturbed."

"Poor man! His sleep will not be so sound as yours, to-night, William."

"Indeed it will not."

"If I were as rich as he is," said Mr. Aiken, "I would not fret myself to death for this loss. I would, rather, be thankful for the wealth still left in my possession."

"No, William, the same spirit that makes you restless and discontented now, would be with you, no matter how greatly improved might be your external condition. Mr. Freeman was once as poor as you are. Do you think him happier for his riches? Does he enjoy life more? Has wealth brought a greater freedom from care? Has it made his sleep sweeter? Far, very far from it. Riches have but increased the sources of discontent."

"This is not a necessary consequence. If Mr. Freeman turn a blessing into a curse, that is a defect in his particular case."

"And few, in this fallen and evil world, are free from this same defect, William. If wealth were sought for unselfish ends, then it would make its possessor happy. But how few so seek riches! It is here, believe me, that the evil lies."

Mrs. Aiken spoke earnestly, and something of the truth that was in her mind, shed its beams upon the mind of her husband.

"You remember," said she smiling, "the anecdote of the rich man of New York, who asked a person who gave utterance to words of envy towards himself—'Would you,' said he, 'take all the care and anxiety attendant upon the management of my large estates and extensive business operations, merely for your victuals and clothes?' 'No, indeed, I would not,' was the quick answer. 'I get no more,' said the rich man, gravely. And it was the truth, William. They who get rich in this world, pass up through incessant toil and anxiety; and, while they seem to enjoy all the good things of life, in reality enjoy but little. They get only their victuals and clothes. I have worked for many rich ladies, and I do not remember one who appeared to be happier than I am. And I am mistaken if your experience is not very much like my own."

One evening, a few days after this time, Aiken came home from his work. As he entered the room where his wife and children sat, the former looked up to him with a cheerful smile of welcome, and the latter gathered around him, filling his ears with the music of their happy voices. The father drew an arm around one and another, and, as he sat in their midst, his heart swelled in his bosom, and warmed with a glow of happiness.

Soon the evening meal was served—served by the hands of his wife—the good angel of his humble home. William Aiken, as he looked around upon his smiling children, and their true-hearted, even-tempered, cheerful mother, felt that he had many blessings for which he should be thankful.

"I saw something, a little while ago, that I shall not soon forget," said he, when alone with his wife.

"What was that, William?"

"I had occasion to call at the house of Mr. Elder, on some business, as I came home this evening. Mr. Elder is rich, and I have often envied him; but I shall do so no more. I found him in his sitting-room, alone, walking the floor with a troubled look on his face. He glanced at me with an impatient expression as I entered. I mentioned my business, when he said abruptly and rudely—

"As I was turning away, a door of the room opened, and Mrs. Elder and two children entered.

"'I wish you would send those children up to the nursery,' he exclaimed, in a fretful half-angry voice. 'I'm in no humour to be troubled with them now.'

"The look cast upon their father by those two innocent little children, as their mother pushed them from the room, I shall not soon forget. I remembered, as I left the house, that there had been a large failure in Market street, and that Mr. Elder was said to be the loser by some ten thousand dollars—less than a twentieth part of what he is worth. I am happier than he is to-night, Mary."

"And happier you may ever be, William," returned his wife, "if you but stoop to the humble flowers that spring up along your pathway, and, like the bee, take the honey they contain. God knows what, in external things, is best for us; and he will make either poverty or riches, whichsoever comes, a blessing, if we are humble, patient and contented."